Call it out for Jay, Siva, Nathan, Max and Tom – The Wanted – the hottest boy band this side of summer. “All Time Low” topped the UK singles chart earlier in August and the follow-up, “Heart Vacancy,” bows at No.2 this week. The Danes Cutfather, Jonas Jeberg and Lucas Secon have co-written the track with boy band veteran Wayne Hector (Il Divo, Westlife and Boyzone). The self titled  debut set The Wanted was issued today. The album includes tracks written by Rami (Britney Spears), Cathy Dennis (Kylie Minogue, Sugababes) as well as Taio Cruz.

WelcheMusic highlighted that the boy bands have returned to the charts in an earlier blog post. Despite being Irish-British, The Wanted’s chart career in Ireland has been rather disappointing. “All Time Low” only made it to No.13 and “Heart Vacancy” only manages to reach No.18 in its first week. It’s also interesting to note that the singles haven’t been released elsewhere.

For those who can’t get enough of this group, please read The Wanted: The Unauthorized Biography, which was written by Chas Newkey-Burden. Quite a feat to rack up an biography (be it unauthorized) in October upon issuing a debut single in July the same year.

But The Wanted should be aware, Westlife is expected to issue its latest album Gravity on Nov.12.

Jamiroquai’s back with two singles + one album

Guess, who’s back? WelcheMusic isn’t the only blogger who wants Jamiroquai to return to the scene. Mark the calendar as Rock Dust Light Star is set to bow on Nov.1. As reported by the blog  Some Kind of Awesome, two singles will be available on the day of the album release. Directed by Howard Greenhalgh, the videos have been shot in Almeria (Spain).These are “White Knuckle Ride” and “Blue Skies.”

Jamiroquai debuted in 1993 with the album Emergency on Planet Earth and the new album will be the seventh in the group’s career. The previous album, Dynamite, was released in 2005 and produced three singles. The UK Top 20 single “Seven Days in Sunny June” was also featured in the film The Devil Wears Prada.

Oskar Linnros Makes the Final Leap to the Top Spot

In an earlier blog post, WelcheMusic highlighted that Shakira managed to top the singles chart last week with a hit that entered the tally in May. The feat is repeated this week as Swedish singer Oskar Linnros finally makes it to the top with “Från och med du.” Interesting to note, the track debuted on the same week as “Waka Waka,” which means that both tracks spends their 23rd week on the chart.

As part of the duo Snook, Linnros reached No.2 in 2004 with the Swedish rap hit “Mister Cool.” And as we’ve reported earlier, his rap partner Daniel Adams Ray recently made his breakthrough as a solo artist.  Adams Ray’s “Gubben i lådan” falls 2-5 this week, and is thus surpassed by his former partner.

“Från och med du” initially peaked at No.2 last month and his debut set Vilja bli peaked at No.2 upon its debut in June. The first single to be lifted off the set was “Ack, Sundbyberg” which peaked at No.52 this summer. In 2008, Oskar Linnros co-wrote Veronica Maggio’s second studio set Och vinnaren är…. The set spawned the three hit singles “Måndagsbarn,” “Stopp” and “17 år.”

Robyn reverse a drop on the chart as “Hang with Me” bests its peak position to No.2. Shakira drops to No.3, while former chart-topper Hans Edler falls 3-4 with “Black Fender.” Swedish House Mafia & Tinie Tempah breaks into the top ten with “Miami 2 Ibiza.” The highest new entry comes from P!nk as “Raise Your Glass” bows at No.15. On the album chart, Håkan Hellström vaults into No.1 with 2 steg från paradiset. Robbie Williams greatest hits set bows at No.4.

Far*East Movement Gets Its First Chart-Topper

The Billboard Hot 100 welcomes Los Angeles-based quartet Far*East Movement to the No.1 spot for the first time. The debut single “Like a G6” has trailed Bruno Mars on the runner-up spot, but he falls to No.2 after being the chart leader for four weeks. Despite being a No.1 hit on the Hot 100, the digital download is pushed back to No.2 by Taylor Swift’s “Back to December.”

Far*East Movement has been featured on hit TV shows such as CSI: Miami, CSI: NY and Entourage. “Like a G6” has charted in Holland, New Zealand, Switzerland, Australia and Canada as well.

Rihanna reverses her fall and moves 6-4 “Only Girl (In the World).” Swift is also the highest new entry on the Hot 100 as “December” bows at No.6.  A giant hit on radio, P!nk’s “Raise Your Glass” leaps 51-11. Finally, Cee Lo Green does not seem to repeat his UK success. “F**ck You” only manages to improve its peak position to No.17.

Robbie Williams is King of the Hill in Europe

Robbie Williams is king of the hill as his greatest hits compilation bows atop Billboard’s European Albums chart. Eminem extends his span to a third week as “Love the Way You Lie” retain the No.1 spot on the European Hot 100 Singles chart.

The Robbie Williams set also tops the German and Austrian album charts and opens strong in Ireland, Spain, Holland, Denmark, Portugal and Switzerland. Williams knocks off Phil Collins, whose Going Back falls to No.2. Rihanna leapfrogs the singles chart with “Only Girl (In the World),” which moves 30-5. It has already peaked at No.2 in Sweden and is dropping, while it’s a chart-topper in Norway and the Belgian region of Wallony.

Cee Lo Green’s “F**k You” tops the chart again this Sunday as Radio 1 counts down the official UK singles tally. He is trailed by Bruno Mars’ “Just the Way You Are” the former No.1 which moves 4-2 this week. The highest new entry samples “Gotta Go Home” – Boney M’s 1979 hit. Titled “Barbra Streisand,” the novelty act Duck Sauce gets its breakthrough hit. Duck Sauce consists of DJ’s Armand van Helden and A-Trak. The American DJ Van Helden is nothing short of a giant on the dance scene, his biggest commercial hit to date is “U Don’t Even Know Me” from 1999. Swedish DJ collective Swedish House Mafia manages to climb 5-4 with “Miami 2 Ibiza,” surpassing Tinie Tempah’s “Written in the Stars” which falls 3-5. This means that Tempah holds both the No.4 and 5 positions as he’s featured on “Ibiza.”

It has taken Joe McElderry a good ten months to follow-up “The Climb,” a UK No.1 from January this year. He returns to the chart with a track originally released by the Norwegian pop group Donkeyboy. He bows at No.6 with his cover version, mind you that his debut hit was a Miley Cyrus cover. The track bows at No.4 on the Irish chart.

Robbie Williams & Gary Barlow takes  a 2-7 drop with “Shame,” while Mike Posner’s “Cooler than Me” breaks into the top ten, leapfrogging 22-9. Usher & Pitbull returns to the top ten as well with “DJ Got Us Falling in Love.” Despite being most played song on UK radio before being released as a single, Michael Bublé bows at No.17. Robbie Williams vaults into the pole position on the album chart with In and Out of Consciousness: Greatest Hits 1990-2010, knocking Tinie Tempah’s Disc-Overy from the top spot. He lands at No.2, just ahead of Cliff Richard who is back with Bold as Brass, featuring classical standards.

Cheryl Cole Returns to the Charts with “Promise This”

Cheryl Cole will return to the charts at the end of this month. Scheduled for release on Oct.21, the up-tempo track “Promise This” has already begun to pick up airplay. The track bowed at No.47 on last week’s UK radio airplay chart. The song is produced by Wayne Wilkins, who was responsible for her debut hit “Fight for this Love.”

Set for release on Oct.24, Cheryl Cole will return with her second album Messy Little Raindrops. The dance-pop album was recorded in L.A. earlier this year. “Promise This” is the first single since “Parachute” reached No.5 in the UK this March. Lifted off her debut album 3 Words, Cheryl Cole managed to spawn three singles from that album.

Gwyneth Paltrow Returns to the Charts

Gwyneth Paltrow returns to the music scene. Yes, as news spread that she will star in the upcoming movie Country Strong, WelcheMusic notes that Paltrow’s musical career is nothing to sneeze at. Headlining the cast of Duets in 2000, she and Huey Lewis managed to top the singles tallies in Australia and New Zealand (the track also topped Billboard AC chart). Lewis-Paltrow made a cover of Smokey Robinson’s “Cruisin’.” Paltrow even secured hit (sans Huey Lewis) reaching No.3 in Australia with her own version of “Bette Davis’ Eyes.” Country Strong stars Tim McGraw as Paltrow’s husband/manager.

A soundtrack is bound for release on Oct.26 and the title track – “Country Strong” – has already reached No.43 on the Hot Country Singles Chart.

They Give “Creep” the Choral Treatment in The Social Network Trailer

The WelcheMusic team looks forward to The Social Network which premiers in Sweden on Oct.22. Already, the trailer has made a lot of buzz and lots of readers ask about the choir singing “Creep” in the background. Resembling Quindon Tarver’s take on Rozalla’s “Everybody’s Free (To Feel Good)” in Shakespeare’s Romeo + Juliet, a Belgian women’s choir chants the classic Radiohead track.

Already reported by Simon Vozick-Levinson at Entertainment Weekly, Columbia Pictures confirms that Scala and Kolacny Brothers is the choir performing the song. This Belgian choir recorded the track on the 2002 album On the Rocks, which features similar covers of Nirvana, Muse, Kylie Minogue and Wheatus songs.

WelcheMusic will definitely report if this will lead to a new trend of given rock songs the choral treatment. Unfortunately, Scala and Kolacny Brothers’ tracks aren’t available on Spotify yet. But we’ll keep our fingers crossed.

Shakira Returns to the Top for a Third Time

In an unusual feat, Sweden’s singles tally awards Shakira’s “Waka Waka” the pole position this week. The track initially bowed on the chart in May and has already reached the top on two separate occasions. Adding a 22nd week on the chart, Shakira puts an end to Hans Edler’s chart reign. The Latin singer manages to place another track on the top 20 as “Loca” bows at No.20. The track is available in two versions – in English with guest vocals from Dizzee Rascal and in Spanish with Dominican rapper El Cata.

The singer Daniel Adams Ray makes a giant 15-2 leap with “Gubben i lådan.” As part of the duo Snook, Adams Ray earned great success with “Mister Cool” a No.2 hit in 2004. His partner, Oskar Linnros got his solo breakthrough this summer with the No.3 hit “Från och med du” which currently sits at No.7 on this week’s singles tally. 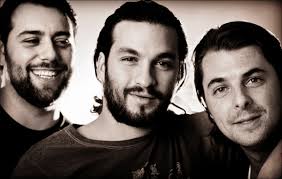 Swedish House Mafia bows at No.11 with “Miami 2 Ibiza,” equaling the peak position of the previous hit “One.” Consisting of Swedish house DJs and producers Axwell, Steve Angello and Sebastian Ingrosso, “Miami 2 Ibiza” collaborates with UK rapper Tinie Tempah whose “Written in the Stars” leapfrogs 50-22 on this week’s chart.

Swedish rock act Kent returns to the singles tally at No.13 with the double A-sided single “Ismael.” Lifted off the En plats i solen set, the track follows the previous chart-topper “Gamla Ullevi.”